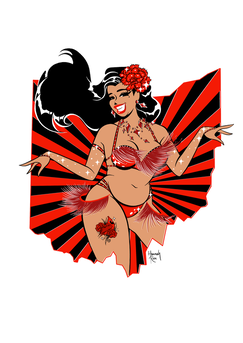 The international award winning Ohio Burlesque Festival is August 11th, 12th, 13th & 14th of 2022 at The Beachland Ballroom.
Join us for four days of over 60+ entertainers from all over the world, Burlesque, Drag, Variety, Vaudeville and so much more!
This annual Cleveland tradition has been featured on Cool Cleveland, Cleveland Scene, WKYZ, Cleveland Plain Dealer, Fresh Water Cleveland, Akron Beacon Journal and Cleveland Magazine.

Special Feature - Ruby Rabbit
Akron, Ohio
​
Ruby Rabbit has been performing across the country and internationally for over 10 years as a Circus, fire, modeling and Aerial artist. Originally from Long Beach, CA. She made her way to The University of Akron where she gained her classical music background has received her BA in Music Performance in 2015.
Her special focus is Fire and Aerialist adding Burlesque in 2020, She loves to combine her artistry together to create unique perspectives in performances. These may include parts of her heritage, nerdums and cosplays that inspire her off stage.

Ruby Spencer has been performing burlesque since 2015 and comes armed with a self-taught passion for performance and theater.  Bringing to life the glamorous showgirls of the 40s and 50s, this statuesque beauty will leave you begging for more.  Known as The Sparkling Sinsation, Ruby will dazzle you with her glittering personality, sultry looks, and playful performance style. This showgirl began her career in Chicago and has since been featured in showcases and festivals around the world including the Midwest Rockabilly Weekender (2017 & 2019), Ohio Burlesque Festival (2017, 2018, 2019), Burlypicks (OH 2017, 2018 & MI 2017), Burning City NeoBurlesque Festival (2018), Toronto Burlesque Festival (2019), The Pink & White Ball (MN 2019), Savannah Burlesque Festival (2019), and Kansas City Burlesque Festival (2019). She was a finalist for the Miss Viva Las Vegas Competition in 2022.
​In 2019, Ruby started her production company and a live band burlesque show, Live & Lucky featuring Mr. Lucky & His Orchestra of Tomorrow. The show highlights some of Chicago’s best musicians and includes many familiar Chicago burlesque faces and out-of-town performers. She co-produces Rising Star Cabaret with local performer, Hot Tawdry, and she is the owner of the Chicago School of Burlesque.

Headliner - Chola Magnolia
Austin, TX
​
This chica sabrosita has been bouncing and swaying across the country for the past thirteen years, bringing her sabor y sangre to stages everywhere. She is a member of Fat Bottom Cabaret (Texas’ only all POC plus size dance troupe), and co-producer of the Midnight Menagerie/ Brown South productions, a queer POC burlesque and drag experience. In 2015 she captured the crown at the San Antonio burlesque festival, was 2018 queen of the Texas burlesque festival,  the 2020 queen of the Noire Pageant in NYC, and in 2021 captured #47 in 20th century’s burlesque top 50 influential list!  Hold onto your calzones, cabrones, she is Chola Magnolia! ​ 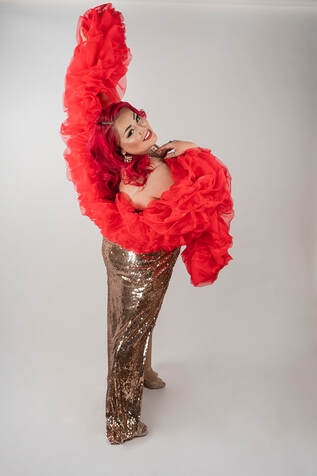 Headliner - Bella Sin
Cleveland, OH
​
​This multi award winning international performer is a proud Mexican-Immigrant woman who holds the honor of being named “One Of Cleveland's Most Interesting People 2011” along with the running title of “Cleveland Burlesque Queen”.  She has been the Executive Producer of the Ohio International Burlesque Festival for its entire 10 years, and is the owner of the long running  Cleveland Burlesque with notable highlights as taking part in Burlesque Hall of Fame’s Moves Shakers and Innovators showcase in 2017, Appearing in number 24 on The Burlesque Top 50 most influential burlesque performers in 2021.
This burlesque historian focuses in decolonizing burlesque history and moving fourth the stories of burlesque performers of latin america.

​This DC Native now residing in New York City, GiGi Holliday is Washington D.C.’s resurgence of glitz, glamour, and allure kicking off her career in 2010 with a double major in class and sass and a minor in tit-elation. Since then her presence has been international and graced stages in Canada, Maryland, Pennsylvania, New Jersey, Massachusetts, North Carolina, New York, Virginia, Georgia, Louisiana, Washington State and her native home Washington, D.C. where she was one of the first burlesque performers in 60 years to perform at the historic Howard Theater along with headlined the New Jersey Burlesque Festival, Jeezy’s Juke Joint and the 2nd Annual Texas Queerlesque Festival most recently What The Funk Burlesque Festival.

Headliner- Tre' Da Marc
Minneapolis, MN
​
This multi-award winning performer began his burlesque career in August 2013 at the Nudie Nubie Amateur Reveal Show, where he won at that month’s Nubie competition. Since then, he has performed in over fourteen festivals across the United States, and has been featured internationally at the Vienna Boylesque Festival and the 2016 Amsterdam Burlesque Awards. In 2015, he won the title of King of Great Southern Exposure, and has continued his reign as a featured performer at the Ohio Burlesque Festival, Wisconsin Burlesque Festival, and Jeezy’s Juke Joint: A Black Burly-Q Revue.

​Tre’ Da Marc is The Chocolate Drop That Won’t Stop. Hailing from Minneapolis, MN, he is an international Boylesque sensation that cannot be duplicated. His combination of sass and ass is his trademark, and he’s ready to leave his stamp (and a fair amount of glitter and sweat) on any stage he meets.

Headliner- Red Bone
San Fransisco, CA
​​
'Internationally known, Minnesota grown' RedBone is one of the biggest names in burlesque! She began traveling the world as one of the Wham Bam Thank You Ma’ams, backing up the infamous Foxy Tann in her quest for world domination in 2005. RedBone featured at the 2019 Viva Las Vegas Rockabilly Weekend VLV Burlesque Showcase and is the 2019 reigning 'Princess of Burlesque' of The Miss Exotic World competition at The Burlesque Hall of Fame Weekender in Las Vegas and now #3 of 21st Century Burlesque Magazine Top 50 Most Influential Industry Figures!!​

Cyclone RedBone is also the Executive Producer of The Nudie Nubie Show - An Amateur Reveal! -- a show designed to support & elevate the 4 years and under generation of teasers. Most recently, she has made it a priority to glamorously & naturally hydrate the skin of humans across the globe with her product Glam Jam -- an all-natural glitter lotion stick aka “Glo-tion For Your Motion". 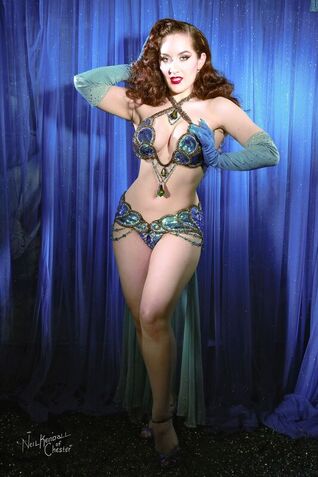 Medianoche, dubbed “Sin in an Hourglass“, has charmed audiences throughout the U.S. and around the world — from select venues in Europe and as far as Singapore, Australia, and Russia.
Medianoche has been featured for nine years running in 21st Century Burlesque’s list of Top 50 Burlesque performers worldwide. She was crowned Queen of Burlesque in New Orleans, and was awarded the prestigious title of Miss Exotic World at the Burlesque Hall of Fame in Las Vegas